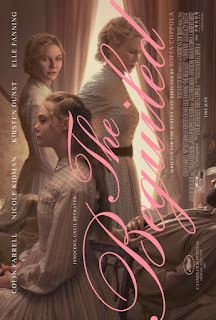 When Sofia Coppola makes a movie, it arrives with high and possibly unfair expectations. Her latest, "The Beguiled" has her signature visual beauty, enhanced by long periods of silence. Some may remember the original from the early 1970s, starring Clint Eastwood. Colin Farrell takes that role in this Civil War melodrama. He's a Union soldier, wounded & bleeding in the woods of Virginia. A young girl from a nearby finishing school, finds him and brings him back to the all-female establishment, headed by an icy Nicole Kidman. Farrell's arrival changes the all-female dynamic, sparking sexual tension for all, including Kidman, as well as a teacher played by Kirsten Dunst, and a budding teen played by Elle Fanning. As you might expect, the new arrangement does not go well. That's a problem. "The Beguiled" goes exactly where movies have made us expect it go. The slow pace provides time to consider the implausibility of it all. Where do they get their food, and fine clothes, living on the edge of battle? Why would they take in a Yankee, when they've arranged a signal to Confederate troops (in case of trouble.) I suspect the original Eastwood piece was a shock in the 1970s. But too many movies have told this kind of story since. "The Beguiled," rated R with 1 star. Does it deliver what it promises? Beautiful, but empty. Is it entertaining? Slow and implausible. Is it worth the price of admission? Disappointing (and no.)
Posted by Arch Campbell at 10:17:00 AM