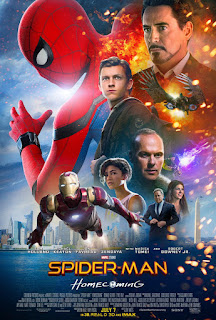 Just when you think the superhero movie has had enough remakes, reboots and rehashes... along comes a story with just enough freshness to win you over. "Spider-Man: Homecoming" made me smile, thanks to Tom Holland's take on the superhero, a geeky 15-year-old high school kid who had a taste of glory in "Captain America: Civil War." Spider-Man joining the Marvel producing team feels like a baseball player joining the Yankees. This switch allows Spider-Man to interact with Robert Downey Jr.'s "Iron Man," and adds a nice adult-to-kid touch. As Spider-Man, Tom Holland finds his inner goofball, as he tries desperately to improve the world, but not quite succeeding. In addition, he must deal with high school, and a crush on a girl named Liz, a brainy member of the school IQ team. Michael Keaton has an equally witty turn as the bad guy. I like that the writers show us Keaton in the alien reclamation business: He recycles the mess made in those many third act finales that destroy large sections of downtown buildings. Keaton has a modern day business cleaning up the mess and recycling any junk he can sell.  As an even funnier twist, Homeland Security shuts him down. Naturally, Keaton keeps just enough alien gear to fashion a giant bird machine; and yes, I get the reference to "Birdman." This latest "Spider-Man" won me over with an unexpected third act twist. Most superhero movies lead into the same finale. At least this time, the filmmakers found a different way to go. "Spider-Man: Homecoming," rated PG-13 with 3 stars. Does it deliver what it promises? Likable superhero. Is it entertaining? Good energy and smile quotient. Is it worth the price of admission? For fans.
Posted by Arch Campbell at 10:18:00 AM