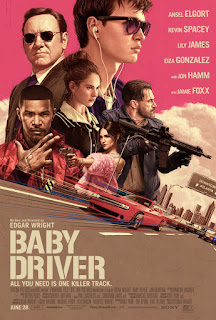 "Baby Driver" takes an ancient plot about a good guy forced to do bad things, and juices it with exhilarating, nonstop music. The result feels like "La La Land" on steroids. Ansel Elgort drives getaway cars for crime mastermind Kevin Spacey, who puts together teams to carry out his nefarious schemes. Elgort did some unnamed thing, putting him in Spacey's debt, which he must work off with his brilliance behind the wheel. The  filmmaker (Edgar Wright) makes "Baby Driver" feels like a movie, shot to fit the soundtrack, rather than the usual other way around. Just think of "Baby Driver" as a Warner Brother depression crime story, set to a millennial mix tape. When Carla Davis' 1966 Memphis soul hit "Baby" introduces Elgort to British actress Lily James, I got goose bumps. A nice cast includes Jon Hamm and Jamie Foxx as bad guys, with Foxx especially menacing. Yeah, the story's violent and obscene, but so much fun, it made this old Baby Boomer feel like a young guy. "Baby Driver," 3 stars, rated "R." Does it deliver what it promises? Crime musical. Is it entertaining? A rush. Is it worth the price of admission? Yes, but maybe not a date night event.
Posted by Arch Campbell at 9:33:00 AM