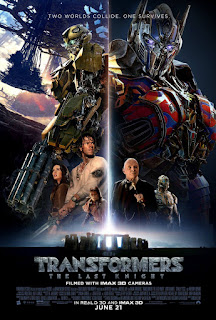 The latest movie in the "Transformers" series, "The Last Knight" offers more than two hours of loud noise, mind-numbing special effects, and an impossible-to-follow plot. Each of the movies in this series tries to convince us these cars that turn into beings, love the Earth, except when they don't. Michael Bay conducts this circus. Likable Mark Wahlberg plays the hero, watching over the remaining transformers hiding in a junk yard, as they're no longer considered friendly, but Mark knows better. The story begins in Medieval times, when Merlin the magician makes contact and uses the Transformers to bring magic in service to the Round Table, King Arthur and Sir Lancelot. The beginning looks like leftovers from this summer's quite bad "King Arthur." Wahlberg winds up in London, where Sir Anthony Hopkins pairs him with Laura Haddock (who looks a lot like Meagan Fox in the original film.) I'm sure Sir Anthony will enjoy the big check from this role, but it doesn't do much for his career. The middle feels like a lift from "The Da Vinci Code," another less-than-stellar movie. The robot voices sound fake. John Goodman is especially annoying as a John Goodman Transformer. Jim Carter, who played the head butler on "Downton Abby," voices a Transformer/butler and feels out of place. It all adds up to headache-inducing waste of time, made in unspectacular 3D. "Transformers: The Last Knight," zero stars, rated PG-13. Does it deliver what it promises? Loud, long and lousy. Is it entertaining? A waste of time. Is it worth the price of admission? No thanks. One of the worst of the summer.
Posted by Arch Campbell at 5:57:00 PM