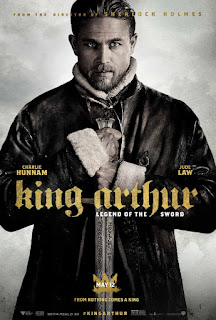 The energetic director Guy Ritchie hopes to breathe new life into the story of "Camelot" in this action-packed CGI adventure telling of King Arthur's origin. We begin with Arthur's father, King Uther Pendragon (played by Eric Bana) fighting the magical forces of Mordred the sorcerer.  The King prevails, but his brother (played by Jude Law) doesn't like it much, resulting in the death of Arthur's parents, and infant Arthur floating away like a character out of a bible story. Fortunately for Arthur, a group of women find him & raise him in the brothel where they work. We see Arthur grow up in a nice visual sequence, as he turns into Arthur the young adult, played by this year's favorite new action actor Charlie Hunnam. For the record, I really liked Hunnam in the surprisingly good "The Lost City of Z." I'm sorry to report that "King Arthur: the Legend of the Sword" is surprisingly bad. Ritchie adds a lot of comic back & forth between Arthur and the band of men who inform him of his royal roots and duty to the kingdom. But the comedy clashes with the amount of fighting and the excess of magical monsters, several of which look like leftovers from a "Harry Potter" movie. "Arthur: The Legend of the Sword" takes more than two hours, and feels every minute of it. I hear the filmmakers hope to produce several more episodes in this series. Count me out. "King Arthur: Legend of the Sword," 1 star, rated PG-13. Does it deliver what it promises? Long, drawn-out & overly-produced action story. Is it entertaining? No surprise, no tension. Is it worth the price of admission? Skip it.
Posted by Arch Campbell at 2:48:00 PM