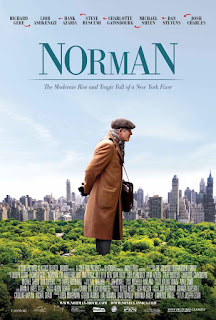 One of my friends told me this about Richard Gere's new movie "Norman." "I guarantee you anybody who's ever lived in New York, knows a guy like this." Gere plays a Manhattan old-school sharpie, one of those shameless guys who push & push, desperate for attention and a piece of the action. After a chance encounter with a rising Israeli politician, Gere talks his way into the highest circles of American/Israeli politics. Midway through a montage of "Norman," and his connections as they connect turns into a great movie moment. Norman's world runs on access, friendship, name dropping, deal making and head-swimming connections, that often come to nothing (except when they hit the jackpot.) Richard Gere makes "Norman" a guy we love to hate, but root for anyway. Israeli director Joseph Cedar tells this story with humor and pathos. "Norman: The Moderate Rise and Tragic Fall of a New York Fixer," 3 stars, rated R. Does it deliver what it promises? Fascinating character study. Is it entertaining? Builds into a spellbinder. Is it worth the price of admission? One to remember.
Posted by Arch Campbell at 10:02:00 PM