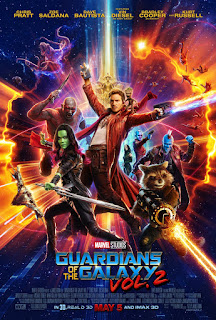 "Guardians of the Galaxy Vol. 2" cooks up a delightful adventure, fueled by jokes, music, and action. The result matches the original. It moves the standard "Star Wars" style adventure forward with funny asides, brilliant music and a group of lovable characters led by Chris Pratt. In the original, Chris, living on Earth obsessed with 80s music and his Sony Walkman, discovers he's the son of a space god and a human mother. In Volume 2, we discover his father (played by Kurt Russell) searching for his son and bringing him to his planet Ego. Hint, Hint: When a guy names his home planet "Ego," it's not a good sign. Zoe Saldana's Gamora continues to turn up her nose at Chris's advances. Dave Bautista as Drax continues making completely clueless remarks. Bradley Cooper voices the CGI raccoon Rocket with wonderful snark. The film highlights music to great effect, and creates a glorious moment for Michael Rooker as Yondu the Ravager, fighting his way out of captivity to the tune of Jay and the American's "Come a Little Bit Closer." It gave me goosebumps. More characters arrive, including a cameo by Sly Stallone promising a larger role in movie #3. "Guardians of the Galaxy Vol. 2" suffers the fate of most action movies. It boils down to a third act fight-to-the-death between the good guys and a villain, while a digital clock counts down the seconds until a big bang. "Guardians of the Galaxy Vol. 2" rates high on the summer fun list. The dialog's funny. The acting's winning. The movies looks great thanks to state-of-the-art CGI. It never feels too long. "Guardians of the Galaxy Vol. 2" 3½ stars, rated PG-13. Does it deliver what it promises? Action heroes in space. Is it entertaining? A delight. Is it worth the price of admission? Get in line now.
Posted by Arch Campbell at 1:00:00 PM