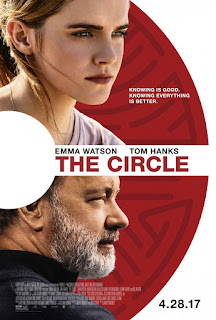 "The Circle" places fresh-faced "Harry Potter" alum Emma Watson in the middle of a high-tech nightmare. She accepts what she thinks is her dream job, working for a high-tech firm secretly planning to track our every move. Watson begins the story worried about her parents (played by Glenne Headly and the late Bill Paxton.) His final role casts him as an older man suffering with MS, adding a certain sadness to his appearance. Watson's firm discovers her parents situation and promptly adds them to the company insurance plan. In gratitude, she swallows the company line, soon agreeing to "go transparent"- which means wear a camera during her waking hours (with the exception of bathroom breaks.) Soon, millions follow her every move, with unintended consequences including the death of a childhood friend. "The Circle" has a lot of speechifying, much of it by Watson, who appears in every scene. She's a talented actress, but she's not up to this. "The Circle" suffers from a bad script, filled with cliches. The story feels stale and out-of-date. The viewer never feels any tension or concern as to how this will conclude. The acting isn't very good. Even Tom Hanks as the pseudo kindly owner of the company fails to connect, while Patton Oswalt, one of the great character actors, merely mugs and frowns for the camera. "The Circle" is a major misfire, one you want to avoid. Zero stars, rated PG-13. Does it deliver what it promises? No thrill to this "thriller." Is it entertaining? Talky and predictable. Is it worth the price of admission? One of the year's worst.
Posted by Arch Campbell at 2:41:00 PM