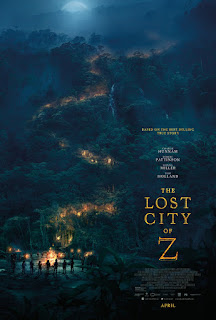 "The Lost City of Z" breathes new life into the classic cinema adventure story. Based on the life of British explorer/soldier Percy Fawcett, this tale makes your jaw drop in too-good-to-be-true fashion. The story begins in turn-of-the-century Ireland as Fawcett (played by Charlie Hunnam) competes on horseback in a race to kill a galloping stag. Fawcett wins the race, kills the stag, and almost wins acceptance from the military upper crust... but not quite. It seems his military career (so far) has been undistinguished, and the Fawcett family name carries the sins of Percy's father, a drunken gambler. Our hero gets his chance to make good, when the British Geographical Society calls him to Bolivia to map the border with Brazil and solve a dispute over rubber rights. Once in the Amazon, Fawcett finds his calling, returning to the jungle multiple times, convinced of the existence of an ancient superior civilization that once thrived deep in the forest. Hunnam gets assistance from his loyal aide (played by Robert Pattinson) who rises far above his work in the "Twilight" series. The story bounces between civilizations. This helps keep our interest, as too much time in the jungle could bog the movie down. Sienna Miller as Fawcett's wife adds an earthy sexy presence as his supporter and equal. Tom Holland grows up as son of the great man. He begs his father for a share of the adventure, and father & son return to the jungle, adding to the mystery that makes his adventure so thrilling. "The Lost City of Z' concludes with a final scene that leaves you wanting more. Director James Gray hooks us from the beginning. The cast is superb. I loved the script, which held my attention. The movie looks beautiful. Four stars, rated PG-13. Does it deliver what it promises? Compelling mystery/adventure. Is it entertaining? Holds you and never lets go. Is it worth the price of admission? One of the year's best.
Posted by Arch Campbell at 5:15:00 PM