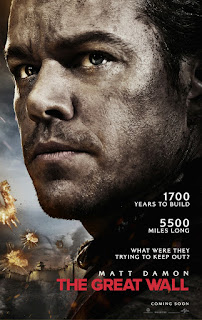 "The Great Wall" really wants to join the ranks of American blockbusters, but misses the mark. A Chinese-American partnership with Matt Damon as the lead, "The Great Wall" feels like it lost something in translation. Damon and his sidekick Pedro Pascal begin the story riding through China, looking for plunder. Suddenly, a monster attacks. Fortunately, Damon is a whiz with a sword and slices the monster to bits, carrying one of the creature's severed claws (as well as a magnetic rock.) Both come in handy. Soon the twosome encounter a massive army gathered at the Great Wall of China, and we learn the story of why the Wall exists... to hold back Jurassic Park-style monsters who invade every sixty years in order to remind the Chinese to avoid the sin of greed. Whew! The first major attack features state-of-the-art special effects and a 3D screen full of creatures. Damon proves himself a brave fighter, and the Chinese accept him. They're not so sure about Pascal or their longtime English prisoner played by Willem Dafoe. Of the three Americans in the film, Dafoe looks especially unhappy and makes little impact. Meanwhile, back to the movie. Damon has discovered The Nameless Order, a selfless tribe led by the athletic and pretty Tian Jing. Any hope of a romance between these two, dies pretty quickly as it becomes clear Jing and Damon will bond over fighting monsters and nothing else. The dialog in "The Great Wall" sounds clunky and awkward. Damon speaks with an Irish accent, which sounds weird. Sometimes "The Great Wall" looks spectacular, other times it looks fuzzy and murky. The acting never ignites. The story's fairly predictable. The result is mixed at best... not bad, but not good. 1 star, rated PG-13. Does it deliver what it promises? Off-kilter epic. Is it entertaining? Awkward. Is it worth the price of admission? No thanks.
Posted by Arch Campbell at 12:30:00 AM