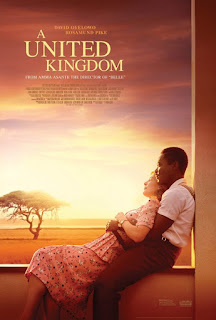 "A United Kingdom" tells one of history's most interesting love stories, the interracial marriage that sparked an international fury in England and Africa in the 1940s and 50s. David Oyelowo plays Seretse Khama who comes from Africa to England to study law. Finishing his studies in 1947, he prepares to return to his homeland Bechuanaland (modern-day Botswana) where he is heir to the country's tribal throne. At a missionary sponsored dance, he meets Ruth Williams, played by Rosamund Pike, a white commoner. The two bond and ultimately fall in love, vowing to stay together (even without her family's approval.) But Khama faces even more disapproval from his uncle, the current leader of his tribe in Africa. Soon the uncle decrees the mixed marriage makes Seretse unfit to rule. The situation escalates as England steps in, discouraging the couple because of pressure from neighboring South Africa, and their emerging policy of apartheid. For a time, the couple lives separately... she in Africa, and he in England (barred from returning to his homeland.) Oyelowo and Pike have enough chemistry and talent to keep this story interesting. "A United Kingdom" feels a little predictable, but the end credits reveal a fascinating conclusion to this interesting historic tale. The production looks good. The story's told well. The actors excel. The facts are fascinating. 3 stars, rated PG-13. Does it deliver what it promises?  Interesting historic romance. Is it entertaining? Well told. Is it worth the price of admission? Worth watching.
Posted by Arch Campbell at 1:51:00 PM