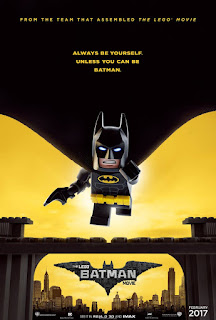 "The Lego Batman Movie" gleefully lampoons Batman and all the other lookalike superhero epics of the past several decades. The comedy begins in the first seconds, as the dark Warner Brothers logo appears with an ironic voiceover, courtesy of lead actor Will Arnett. Lego Batman is revealed as a self-centered, narcissistic jerk, who can't give the Joker the satisfaction of a love/hate relationship. Batman declares "I don't do 'ships' (as in relationships.)" The plot doesn't matter much; but just to sketch it out, Commissioner Gordon is retiring and his daughter (voiced by Rosario Dawson) takes his place. She has some modern ideas, that don't involve Batman. This blindside gets amped up as Batman develops an instantaneous (yet not reciprocated) crush. Ralph Fiennes sounds perfect as Alfred the butler; and Michael Cera adds humor as a Gotham orphan who talks his way into Bruce Wayne's world, and ultimately wins the role of sidekick Robin. "The Lego Batman Movie" generates silly, wonderful fun. The jokes fly fast and furious and round up almost every movie villain ever conceived, from the "Wizard of Oz" to "Harry Potter." The gags run out of steam about an hour in; but the finale's swell, and so is "The Lego Batman Movie." 3½ stars, rated PG. Does it deliver what it promises? Funny animated comedy. Is it entertaining? Delightful. Is it worth the price of admission? 2017's funniest (so far.)
Posted by Arch Campbell at 1:36:00 PM