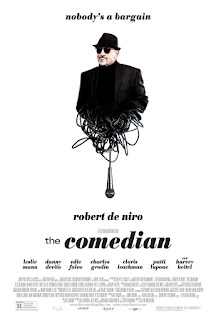 Robert De Niro plays an over-the-hill one-time TV sitcom star trying to keep his career going as a foulmouthed comic in "The Comedian." As the story begins, he joins has-beens Jimmy Walker and Brett Butler in a seedy club for a "Nostalgia Night." Things quickly go wrong, when a heckler gets under De Niro's skin and things escalate. De Niro beams the guy with his microphone, and winds up in jail for assault. 30 days later, he leaves prison and begins community service in a soup kitchen, where he meet Leslie Mann (also doing community service for assault.) The two begin a relationship, which qualifies as age-inappropriate and borders on creepy. Also creepy is the parade of old-timers who turn up looking less than their best. They include Harvey Keitel, Danny DeVito, Charles Grodin and Cloris Leachman, plus a cameo by Billy Crystal. The combination of elder comics and foul language (plus a few other wrong turns) makes "The Comedian" difficult to watch. I laughed from the shock of the awfulness of this film; but there's nothing funny watching a group of great talents go wrong. "The Comedian" leaves you with the image of a first grader delivering a routine, De Niro teaches her. Ugh. Zero stars. Rated "R" for language and sexual situations. Does it deliver what it promises? The title says "The Comedian," but there's nothing funny in this. Is it entertaining? Painful to watch. Is it worth the price of admission? No, no, a thousand times no.
Posted by Arch Campbell at 12:00:00 PM