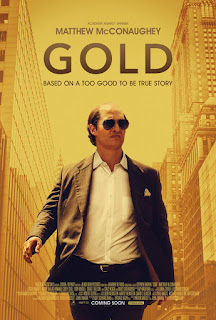 Matthew McConaughey looks terrible in "Gold," and that's the point. He plays a passionate, driven prospector who drinks, smokes, eats, and talks too much, but can't help it because he inherited his family gene for mining. He takes over his father's business, but runs it into the ground during a bad economy. Looking for a break, he joins forces with Edgar Ramirez, and the two begin looking for gold in Indonesia. Everything goes wrong, including a serious bout of malaria for McConaughey. But things change. When he wakes up from the fog of his illness, his partner announces they've made a strike. This sends our guys back to Wall Street and the New York Stock Exchange. As in "The Wolf of Wall Street," things get out of control pretty fast... too fast for Matthew's girlfriend, played by Dallas Bryce Howard. The story skips forward and backward in time, and that technique helps keep our interest. McConaughey seems full invested in this character, which keeps the energy up when he's on screen. The surprises and twists feel similar to "The Wolf of Wall Street," "Argo" and "American Hustle." As a result, the movie feels just a little too familiar. I enjoyed "Gold," but I've seen the same kind of story before, done better. 2½ stars, "R" rated. Does it deliver what it promises? Out of control, big money comedy adventure. Is it entertaining? Fun at times. Is it worth the price of admission? More brass than gold.
Posted by Arch Campbell at 7:29:00 PM