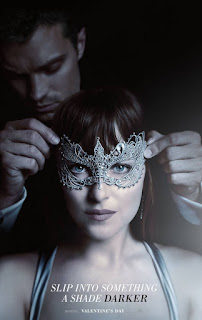 "Fifty Shades Darker" doesn't need to be a good movie. It only needs to satisfy the audience of the book and the first film installment, and I guess (in that regard) it succeeds. This episode reunites the "Fifty Shades of Grey" loves Anastasia Steele and Christian Grey. They broke up at the end of the first movie, when Christian's S&M needs weirded out Anastasia. Jamie Dornan returns as the demanding billionaire, attracted to Dakota Johnson. Many don't see much chemistry between these actors; but the uncomfortable audience at their coupling signals something approaching acceptance enough. The plot has Grey begging Anastasia to return. This time, with a more comfortable set of intimate rules. The red room with all of its S&M paraphernalia still exists, but now comes into use only when Anastasia initiates a visit. The plot thickens with sexual harassment from Anastasia's new boss, plus some stalking by one of Grey's former S&M partners, interested in revenge. Bella Heathcote plays the stalker and looks like the figure in "The Ring," who climbs out of the VHS machine to kill any victims who watch her video. Heathcote provides a jaw-dropping moment that drew the longest laugh-out-loud reaction. Also on hand, veteran actresses Marcia Gay Harden (as Grey's adoptive mother) and Kim Basinger as the older woman who initiated Grey into the S&M world, and still has an interest in her much younger pupil. Harden and Basinger camp it up like Davis and Crawford in their final "B" movie days. The love scenes look tame, although I imagine female fans will approve of Anastasia's new empowerment.  The other plots feel like a lift from "Dynasty" or "As the World Turns." The combination of these elements makes for more of a girl's night out (wink, wink) than a night at the movies. I have a feeling that's gonna work out OK for the filmmakers. 1 Star, rated "R." Does it deliver what it promises? Soft core S&M romance. Is it entertaining? Mostly laughable, even by mistake. Is it worth the price of admission? It's cheaper than a visit to the Chippendale's.
Posted by Arch Campbell at 1:26:00 PM