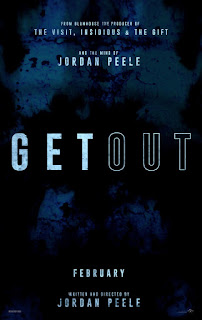 "Get Out" combines comedy, satire, and scream-out-loud horror in an exciting, new way. The opening moments in which a black kid hunts for an address in a white suburb sets up a wile story of white privilege, interracial dating, racial tension and society assumptions. "Get Out" does something new in the manner of "Rosemary's Baby," "The Stepford Wives" or "Fatal Attraction." Daniel Kaluuya plays Chris, a talented black big-city photographer dating beautiful white Rose (played by Allison Williams of "Girls.") After a few months as a couple, she wants Chris to meet her parents, whom she says don't know he's black, but it won't make any difference. At their secluded mansion in the woods, Bradley Whitford and Catherine Keener appear welcoming; but something feels off. Rose's hyper brother played by Caleb Landry Jones spends a lot of time discussing Chris's athletic ability, and Steven Root (one of the all-time great character actors) makes things even more bizarre as the blind owner of an art gallery who admires Chris' photography (This turns into a bizarre plot point.) The family employs a groundskeeper played by Marcus Henderson and a maid played by Betty Gabriel - two black servants in an all-white household, explained a little too readily by a very creepy Bradley Whitford. Catherine Keener taps into her inner creep as a psychiatrist/hypnotist, whose ability to ping a china cup will make the hair on your neck rise. The horror is quite horrible, and the screams during the screening come naturally. As in any great horror film, "Get Out" builds and releases with hearty laughs, many of them provided by Lil Rel Howery as Chris's pal who works for the much maligned TSA. Jordan Peel is best known for his work with the comic team Key and Peele. In "Get Out," he demonstrates a director's sure hand. We know he's taking us somewhere only he knows, and we're gonna scream and love it. The production looks great. The acting's superb (I especially liked Allison Williams.) The direction is brilliant. The body count's high and bloody and completely new. 3½ stars, rated "R." Does it deliver what it promises? Sure handed horror/comedy/satire. Is it entertaining? Never lets up. Is it worth the price of admission? Might be one of the year's best.
Posted by Arch Campbell at 5:02:00 PM