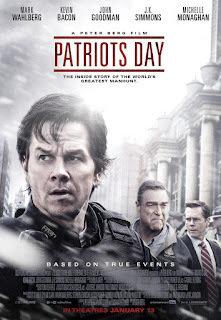 Mark Wahlberg and director/writer Peter Berg make a good team. Together they have created successful films with something inspiring to say about men & women called to perform extraordinary tasks. In "Patriots Day," Wahlberg plays a Boston police sergeant assigned to watch over the crowds at the finish line of the annual Boston Marathon. The year is 2013, and the Tsarnaev brothers have stuffed homemade bombs into their backpacks, igniting them near the finish line with deadly force. "Patriots Day" impressively mixes recreated footage with actual video of the bombing and aftermath. The story celebrates the work of the first responders, the emergency room staffs, and the police who begin the search for the bombers. The story unfolds through the eyes of Wahlberg's character. Kevin Bacon makes a strong appearance as an FBI investigator, as does John Goodman as Boston's Police Commissioner, and J.K. Simmons as a suburban police chief caught in a shocking shootout on a sleepy side street. This story could have gone wrong at several points; but it avoids flag-waving or profiling, and chooses to end with a message of hope. I came away with increased appreciation for law enforcement, detective work, the medical profession, and the people of Boston. 3½ stars with an "R" rating. Does it deliver what it promises? Reality action movie. Is it entertaining? Well balanced and impressive. Is it worth the price of admission? A strong message about hope and uplift.
Posted by Arch Campbell at 2:39:00 PM