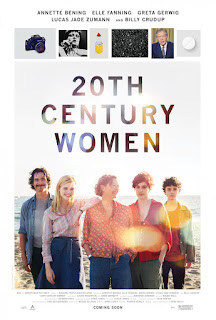 A teenage boy comes of age, and so does his mother in the charming mess-of-a-movie "20th Century Women." I say "mess" with a smile, because the story details an over-the-top household of mostly women, encouraged by Annette Bening to help bring up her son and make him a better man. The time is 1979, and the vibe is very post-hippie. Bening presides over a household full of characters, including Greta Gerwig, a free-spirited photographer/artist, Billy Crudup, a do-it-yourself home remodel maven, mechanic, and pottery artist, and Elle Fanning, a struggling, promiscuous 17-year-old, who sleeps with, but refuses to have sex with the center of the story, a confused 16-year-old boy played by Lucas Jade Zumann. "20 Century Women" strikes me as an updated, family comedy along the lines of "You Can't Take It With You." The story captures the awkwardness of parents trying to understand their children and vice versa. The movie looks back at a time with the benefit of hindsight. Occasionally, Annette Bening's character gets a little annoying, as do all of the characters with their immaturity on display. I think "20th Century Women" might have improved with some additional editing. 15 minutes less, could have left us wanting more; but even now, it stays with me. It hits a nerve in my own family memories. The performances are lovely; but among this great cast, Annette Bening stands out. She captures the joy, pain and warts and all of parenthood. 3 stars, "R" rated for brief nudity and sexual situations. Does it deliver what it promises? Coming-of-age in the late 1970s. Is it entertaining? Touching and funny. It it worth the price of admission? A little much at times, yet a worthy award contender.
Posted by Arch Campbell at 11:36:00 AM