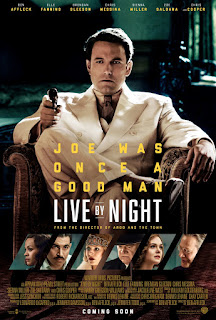 I really wanted to love "Live by Night," Ben Affleck's Prohibition gangster flick. I loved the hats. I loved the clothes. I loved the cars. I loved the barrels of rum getting shipped various places as the stories spin out about crooks selling illegal alcohol. But I couldn't love "Live by Night" because of its complicated, overstuffed never-ending plot. The tale begins in Boston with Affleck as a small time crook, romancing his boss' girlfriend played by an almost unrecognizable Sienna Miller. A rival gangster recruits Affleck, when our hero gets out of prison with a grudge against the mobster who busted Affleck's chops and killed his mistress. The scene shifts to Tampa, Florida, and sunny scenes of linen suits, straw hats and tommy gun action. Zoe Saldana appears as a Cuban rum empress and Affleck's new love. More subplots involve Sheriff Chris Cooper, his wayward daughter Elle Fanning, the KKK and a "Scarface"-style gun battle. But there's more and more, and soon "Live by Night" threatens to never end. The result is long on style, but irritating... almost more of an idea of a movie, than the real thing. 1 star, "R" rating. Does it deliver what it promises? Overstuffed gangster story. Is it entertaining? Long and meandering. Is it worth the price of admission? A big disappointment.
Posted by Arch Campbell at 1:07:00 PM