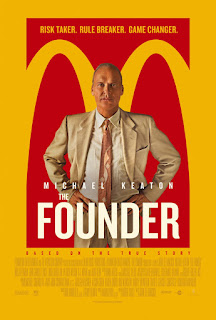 I'm not sure what the filmmakers want us to think of "The Founder," the story of Ray Kroc, the salesman who turned McDonald's into a global force (for both good and evil.) Much of the movie's appeal comes from Michael Keaton's performance as Kroc, an old-fashioned, on-the-road salesman who peddles his products with the power of positive thinking. The story begins with the oft-told story of Kroc selling malted milk machines, and driving all the way from Illinois to California to investigate a new restaurant that uses them. He discovers the original McDonald's, run by brothers played by John Carroll Lynch and Nick Offerman. They've changed their 1940's drive-in into a walk-up assembly line hamburger place, where the order comes out and into a paper bag within seconds. Keaton (as Kroc) recognizes a brilliant idea when he sees it, and sells the brothers on letting him franchise their operation. At first, things go fine, but then the arguing begins, and ultimately the lawyers get involved. When the dust settles, Kroc wins and the McDonald brothers lose, even on a handshake promise Kroc makes to get them to settle. "The Founder" seems content to show Kroc, warts and all. As Kroc, Keaton belts down bourbon, dumps his wife, puts the moves on another guy's wife, runs the guys with the original idea out of business, and winds up fat and happy in Beverly Hills. "The Founder" sticks to the 1950s, 60s and 70s. I'd like to know what the filmmakers think of the effect of McDonald's on our world today. 2½ stars, PG-13. Does it deliver what it promises? Super salesman biography. Is it entertaining? Story about a not very nice guy. Is it worth the price of admission? Not exactly uplifting, but pretty interesting.
Posted by Arch Campbell at 1:00:00 AM