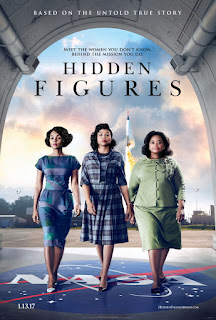 "Hidden Figures" presents the uplifting story of three black women, who used their minds in the service of an America not quite ready to grant them equality. Taraji P. Henson plays Katherine Johnson, a young math prodigy who joins the space program at NASA's Hampton, Virginia facility in 1961. Johnson works as a "human computer," as her mind works faster than the machines available at the time. Ultimately, she figures the equations needed to send Astronaut John Glenn into space (and more importantly) bring him back alive. Henson is one of three women profiled in this story. The excellent Octavia Spencer and Janelle Monáe portray Henson's friends and fellow workers. Spencer figures out the new computer system, and ultimately ascends to supervisor, while Monáe makes her way into an engineering program. All the women succeed, despite the discrimination of the time. Kevin Costner (as Henson's boss) strikes a blow for equality when he ends the practice of separate bathroom facilities for blacks and whites, saving the women the time-consuming journey from their lab to the facilities located at an inconvenient distance. The women's stories get updated in the finale, a satisfying end of this chapter of their lives and of the Civil Rights Movement. "Hidden Figures" relies on much of the music and culture of the early 60s to establish the time frame. Occasionally, I wanted more story and a little less atmosphere. Visualizing the work of a math genius is difficult, but Katherine Johnson's genius needs very little polishing. 'Hidden Figures" arrives not long after the death of John Glenn, making this story even more moving. 3 stars, rated PG. Does it deliver what it promises? Uplifting true story. Is it entertaining? Well-told. Is it worth the price of admission? Well worth it.
Posted by Arch Campbell at 12:30:00 PM