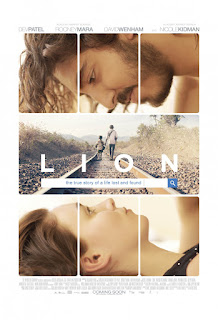 "Lion" hit me like a ton of bricks. I expected a run-of-the-mill sentimental story about a kid who gets lost and finds his way home. Instead, "Lion" makes a profound statement about homeland and how it influences our being. The story is true, based on a memoir by Saroo Brierley about his hard scrabble life in India. He and his brother go out daily, to beg for food and scrounge for pennies lost under the seats of railroad cars. One night, Saroo, age five, climbs onto an out-of-service train and falls asleep. The train starts moving and transports the little boy a thousand miles away from his village, whose name the child can't remember. Thrown onto the streets of a strange town, the kid has enough street smarts to avoid a few close shaves with danger. He winds up protected by social services. An Australian couple adopts him, and transports him to another continent. He grows up comfortably, but lives with the mystery of where he comes from and who he really is. "Lion" features a marvelous performance by young Sunny Pawar as the five-year-old Saroo. The kid captures the agony of the loss. Dev Patel takes over as the grown up Saroo, living with the pain of the mystery of his identity. Using Google Earth - and I know this sounds like product placement, but it really is vital to this story - Patel traces his roots, and ultimately finds his mother. Besides Pawar as young Saroo and Patel as the grown up Saroo, Nicole Kidman has a nice role as his adoptive mother who also takes on the burden of a second son more badly scarred by his childhood. Rooney Mara plays Saroo's girlfriend, but isn't given much of a role. However, I can't imagine many who can shrug off the powerful conclusion of "Lion." The true-life updates over the credits are even more powerful. There's no place like home, that place we hold deep inside and "Lion" captures the feeling perfectly. 4 stars, rated PG-13. Does it deliver what it promises? Powerful true story with great acting. Is it entertaining? Fascinating. Is it worth the price of admission? One of the year's best.
Posted by Arch Campbell at 4:29:00 PM