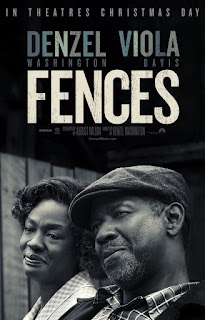 Denzel Washington and Viola Davis give stirring performances in Denzel's lovingly directed film of August Wilson's powerful play "Fences." Wilson aimed to chronicle the black experience in America, during the decades of the 20th century. "Fences" brings us to the 1950's, as Washington plays a hard-working Pittsburgh garbage man, who comes home every night to his role as kind of his blue-collar bungalow of a castle. Viola Davis cooks his meals, raises his sons and listens as best she can to her husband's sermons on the value of hard work and ethics, while barely disguising his rage at racism and missed changes. She turns a blind eye to her husband's bullying of their sons, but a crisis brings out her steel core. Over the course of this story, secrets and lies are exposed and family members betrayed. It's hard to take your eyes off Denzel Washington, as he breathes fire into August Wilson's dialogue. The building of a backyard fence stands either for the barriers the characters face, or the safety they seek inside their home. Many consider "Fences," August Wilson's most powerful play. The movie sticks to the script and seems content to look like a film of a play. This choice allows the performances to come through. 3 stars, rated PG-13. Does it deliver what it promises? Denzel Washington performance. Is it entertaining? Powerful. Is it worth the price of admission? An important piece.
Posted by Arch Campbell at 11:59:00 AM