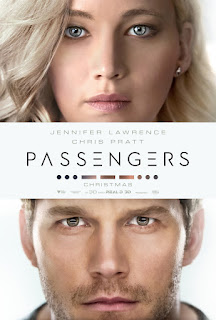 I'm a sucker for a good science fiction story, so I happily settled in for "Passengers" with Chris Pratt and Jennifer Lawrence. It's the future, and Earth is overpopulated, so there's money to be made in sending people to a whole new planet. There's just one catch: The journey takes more than 100 years. The "Passengers' have to go into suspended animation for ten decades or so. But these best laid plans go awry in the first few frames, as the space craft bumps into a field of meteors, and things start to malfunction. Chris Pratt gets the first hit, when his pod opens up several decades too early. Luckily for the story, Chris is a futuristic mechanic, who ultimately will figure out how to fix things. Meanwhile, what to do in a futuristic world all by yourself, with only a bartender droid for company? Cue Jennifer Lawrence; and I am sorry to say (through no fault of her own) here's where the story unravels. Thanks to the spoiler alert system, I can't quite reveal what happens next, except to say Pratt takes a few unforgivable actions which the movie tries to forgive. In spite of the great look and the nice chemistry between Pratt and Lawrence, the script hangs things up halfway through, and never resolves them, failing both the actors and the audience. 2½ stars for a nice try. Does it deliver what it promises? Futuristic good looking space fantasy. Is it entertaining? Until the script goes wrong. Is it worth the price of admission? These passengers have too much freight.
Posted by Arch Campbell at 10:06:00 AM