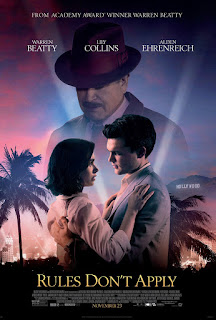 The legendary Warren Beatty appears in a movie for the first time in 15 years. Beatty has said he hoped someday to produce a film about Howard Hughes, and so now he delivers "Rules Don't Apply." Beatty frames his Hughes portrait inside a light, Woody Allen-style romance between Alden Ehrenreich and Lily Collins. Ehrenreich works as one of Hughes' drivers, while Collins comes to Hollywood as part of Hughes' stable of starlets hoping for work in a Howard Hughes-produced movie. Set in the late 1950s, Collins arrives with her mother (played by Beatty's real life wife Annette Bening) in tow, the better to keep watch over the young, religious virgin. Ehrenreich falls hard, even knowing that Hughes employees are expressly forbidden from dating the boss' stable of actresses. As the story unfolds, Beatty (as Hugh) gradually appears, first in shadow, then in partial darkness and finally full-on. I suspect part of the shadow/darkness hides Beatty's advanced age, although the guy still looks great. As Hughes, Beatty goes a little over-the-top, reflecting the man's quicksilver personality in the days before dementia sets in. In one scene, Beatty flies a plane in full hyperactive glee. Some might find this charming, but I found it a little irritating. The best Howard Hughes films have already been made, including "The Aviator" and "Melvin and Howard." Warren Beatty deserves his reputation as one of film's most creative actor/directors. But "Rules Don't Apply" feels like an old man's vanity project. Does it deliver what it promises? A chance to see Warren Beatty. Is it entertaining? Mildly. Is it worth the price of admission? Skip it and watch one of Beatty's classics: "Bonnie and Clyde," "Reds," "Bugsy" or "Bulworth."
Posted by Arch Campbell at 2:17:00 PM