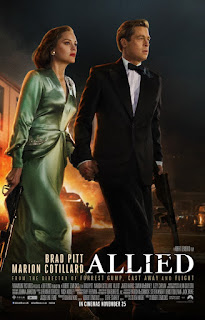 "Allied" recalls the great romantic thrillers of the 1940s, up to and including the greatest of them all, "Casablanca." Brad Pitt and Marion Cotillard glide through this story with as much of the same ease & style as Bogart and Bergman. Pitt - now a little older and more handsome than ever - begins the story parachuting into the desert outside Casablanca in 1942. A car picks him up, gives him a clue to find the woman who will play his wife; and together, the two spy on Nazis operating in the city, gathering intelligence and plotting a mass execution. When the couple meet in a bar, you expect it to be named "Rick's," and when Pitt murders a high German officer, you expect someone to shout "Round up the usual suspects." After an exhilarating first act, the spies fall in love, marry, move to London during the blitz and have a daughter. The scenes of wartime London and the nightly German bombing raids are thrilling and terrifying. And then the twist. Army intelligence suspects Cotillard of being a counter spy. Is it love, or is Pitt sleeping with the enemy? "Allied" looks great. The chemistry between Cotillard and Pitt crackles. The story holds our attention, even as it winds down to "is she guilty or not? "Allied" has both the fun, style and tension of a classic. Does it deliver what it promises? Romantic wartime spy story. Is it entertaining? Satisfying, even as it winds down. Is it worth the price of admission? Easy to love.
Posted by Arch Campbell at 2:24:00 PM