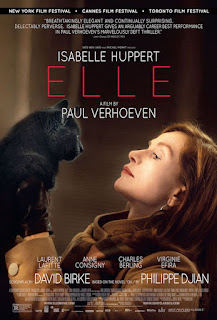 "Elle" has received much attention, mainly because of the participation of the revered French actress Isabelle Huppert. Paul Verhoeven directs, which should give you a hint of what to expect from the director of "Basic Instinct" and "Showgirls." "Elle" opens with the violent rape of Huppert by a man wearing a ski mask who bursts into her apartment. Huppert shrugs off the assault and goes about her business, not bothering to report it to authorities. She resumes her work heading a video game company, specializing in violent, sexually-charged fantasy programs. As the story develops, we learn about her creepy back story and watch her affair with her best friend's husband... an affair later explained with (just) a shrug. Some of the story's tension comes in identifying the rapist, whose act either occurs or is shown to us multiple times. "Elle" knows how to unnerve the viewer. It could open a conversation on violence, sex, adultery, and repression. I won't deny it has power, but as for me, I prefer to take a pass. Does it deliver what it promises? Disturbing French thriller. Is it entertaining?Unnerving. Is it worth the price of admission? Sort yourselves out.
Posted by Arch Campbell at 1:51:00 PM