Fantastic Beasts and Where to Find Them Review - 3 Stars 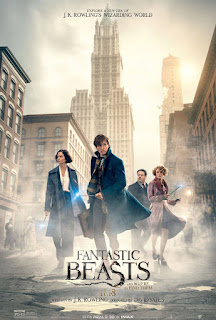 "Fantastic Beasts and Where to Find Them" answers the question, "What happened before we met Harry Potter and learned about his magical world?" J.K. Rowling gives fans the run-up to Harry's story. The result is great fun and very satisfying. We begin in New York City in the 1920's, as Newt Scamander (played by Eddie Redmayne) lands on Ellis Island. Harry Potter fans know this character as the author of the Hogwarts textbook, that gives the movie its title. Redmayne, a bumbling professor, plans to travel to the great American west to release a magical Thunderbird; but first, he visits the Big Apple. This visit takes a bit longer than expected, when a few of Newt's whimsical creatures escape and create more than a little havoc among the humans who know nothing of the magical world. Katherine Waterston arrives on the scene as a magical police patrolwoman ready to punish Redmayne for the crime of letting his critters escape. Dan Fogler adds to the fun as an average Joe trying to get a bank loan, who just happens to have the same kind of suitcase as Redmayne, resulting in appropriate confusion. But a darker plot emerges, involving Colin Farrell and an intense young man played by Ezra Miller. The last reel turns into another good versus evil showdown with plenty of destruction and special effects. Fun, humor and an overall lightness save "Fantastic Beasts" from just another superhero story. "Fantastic Beasts" has actual laughs and smiles and, by the way, four more sequels in its future. I liked Redmayne in this role, and I liked Waterston as well. Dan Fogler adds a comic touch as a non-magical character or No-Maj (later called Muggles.) Fogler stands in, for those of us who toil in the real world. Like him, I'm glad I got to glimpse J.K. Rowling's alternative universe. Does it deliver what it promises? Harry Potter prequel. Is it entertaining? Captures the magic. Is it worth the price of admission? For the fun of it.
Posted by Arch Campbell at 11:45:00 AM