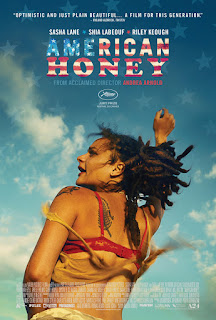 “American Honey” feels like a documentary. British director Andrea Arnold follows a group of magazine sales gypsies for some two and a half hours as they crisscross the America of Interstate Highway franchises. Many of the actors are non-professionals, including lead actress Sasha Lane. She  commands your attention as a young woman left by a strung out mother to watch over her young siblings. The opening segment finds Sasha diving into a grocery store dumpster looking for food for her siblings, a scene that brilliantly telegraphs her circumstance. A van-load of older teens pulls into a parking lot, where she makes eye contact with Shia LaBeouf. He recruits and trains her in magazine sales, and soon she leaves her siblings for life on the road. LaBeouf teaches her to make up stories and invent charities and incidentally how to get away with a little thieving. An encounter with rich, middle-aged cowboys and a visit to an oil field comes close to prostitution. Riley Keough manages the sales force with techniques right out of “Lord of the Flies.” She’s a redneck terror and doesn’t like the attention LaBeouf pays to Sasha. “American Honey” captures the grit, crud and freedom of the American road. I’m still thinking about these lost kids; and I plan to watch for Sasha Lane and Riley Keough - together, they make “American Honey” unforgettable. Does it deliver what it promises? Gritty, documentary-style on the road story. Is it entertaining? Not fun to watch, but compelling, even if a little too long. Is it worth the price of admission? One of the year’s most powerful.
Posted by Arch Campbell at 8:58:00 AM