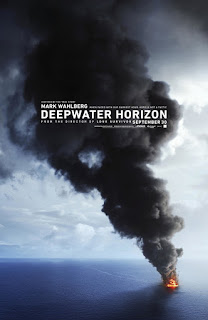 Mark Wahlberg plays a hard-working hero in "Deepwater Horizon," the recreation of the 2010 oil rig disaster off the coast of Louisiana, now known as the worst American environmental hazard in history. 11 workers died in the explosion that happened because BP and subcontractors cut corners trying to bring in an ocean well. Wahlberg has a long list of credits playing heroic men who survive long odds. This character is based on Matt Williams, who worked as chief electronic technician and who saved several lives, the night of the disaster. "Deepwater Horizon" provides a nice role for Kurt Russell as rig crew chief with a talent for speaking truth to power. John Malkovich creates one of his great villain roles: In this case, a Louisiana-born executive steeped in Cajun culture but interested only in saving giant BP a few dollars. These days, when Malkovich shows up in a movie, you know he's the bad guy in the story. Soon enough, the well explodes and the destruction begins. "Deepwater" remains at heart, an old-school disaster movie. The end credits include an update on the fate of the executives blamed for the disaster and the fate of the men and women who scrambled for their lives. I'm not sure anything has changed, save for the giant fines assessed BP and the money they had to spend on the cleanup. Don't expect much beyond a recreation of the event in "Deepwater Horizon." Do expect another admirable role for Wahlberg, plus a nice turn for Russell, and a delicious bad guy role for Malkovich. Kate Hudson appears as Wahlberg's wife, but I never believed her accent or her country girl act. "Deepwater Horizon" 2½ stars, PG-13 for intense situations. Does it deliver what it promises? Disaster story. Is it entertaining? Straightforward. Is it worth the price of admission? A cautionary tale, sometimes hard to watch.
Posted by Arch Campbell at 2:28:00 PM