The Birth of a Nation Review - 3½ Stars 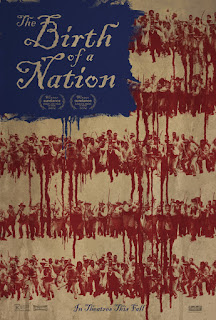 "The Birth of a Nation" arrives during a polarizing Presidential campaign and the cry of the often oppressed that "Black Lives Matter." Nate Parker stars and directs the story of the 1831 Nat Turner slave rebellion in Southern Virginia. If you don't know this story, plug it into Google and learn that the smart & gifted Turner fought against the injustice of slavery, leading an army of slaves in a night of murder and mayhem, and paid for it with his life. Turner learns to read the Bible, and as a young man preaches to his fellow slaves. His owner, played by Armie Hammer, discovers Turner can earn him money by traveling to other plantations to preach and thereby "quiet" other owner's slaves. The conditions Turner sees, and his discipline (tied to a whipping post, beaten, and left all night) for baptizing a white man, turn Turner to violence. As Turner, Nate Parker has charisma and shows deep acting talent. Penelope Ann Miller, whom I haven't seen in a movie in years, captures the inequity of slave holders, first helping Turner, then turning a blind eye to him. Jackie Earl Haley makes a great villain and gives the audience an outlet for outrage. "The Birth of a Nation" announces itself as an important film. It borrows the title of the 1915 D. W. Griffith silent epic, the story of the rise of the Klan after Reconstruction. This "The Birth of a Nation" turned that story inside out. Given the state of current culture, don't expect any enjoyment from watching "The Birth of a Nation." But do expect a moving and often unnerving experience. 3½ stars, rated "R" for violence, nudity, and unnerving situations. Does it deliver what it promises? Well-acted, strong story from American history. Is it entertaining? Powerful. Is it worth the price of admission? One of the year's most important movies.
Posted by Arch Campbell at 11:52:00 AM