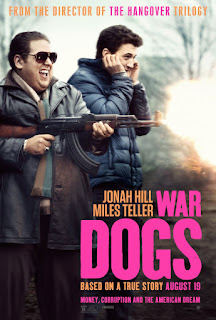 A good guy comes under the spell of a less-than-good guy, thanks to a little greed, in the based-on-truth comic drama "War Dogs." Miles Teller plays the good guy and has great chemistry with his childhood pal Jonah Hill, the alpha male in this story. Jonah has stumbled into a scheme to sell guns and ammo to the U.S. military, who need as many weapons as they can get their hands on, thanks to the Middle East invasions of the early 2000's. At first the money rolls in, but then the boys bite off a little bit more than they can chew thanks to arms dealer Bradley Cooper. "War Dogs" generates great fun thanks to Jonah Hill, who excels as a likable but immoral guy. A little known Cuban actress named Ana de Armas makes a great impression as Miles Teller's disapproving wife. Kevin Pollak adds a bit of fun as a crooked dry cleaner. It seems everybody wants the easy money available in the gun business until it all unravels. "War Dogs" feels like a cross between "Wolf of Wall Street" and "American Hustle." It reflects another attempt to copy the style of filmmaking that made those movies and "The Big Short" so enjoyable. That's another way of saying there's nothing new here. 2 ½ stars. Rated "R" for sex, drugs, and violence. Does it deliver what it promises? Comic drama. Is it entertaining? Great fun, even if it feels familiar. Is it worth the price of admission? Easy to watch and easy to like.
Posted by Arch Campbell at 10:27:00 PM