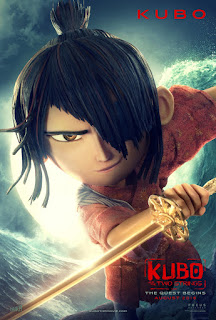 “Kubo and the Two Strings” advances the art of animated storytelling far beyond children’s entertainment. Based on a Japanese folk tale, Kubo has lost an eye and discovers his ancestors are coming for the other one, thanks to a family feud. To protect himself, Kubo must find his father’s armour. His quest enlists the aid of a talking monkey and a samurai warrior, who has taken the form of a talking bug. Charlize Theron and Matthew McConaughey voice the animals. Rooney Mara voices the angry aunt, intent on harm. Kubo performs origami stories, which he literally whips up in some very neat segments. “Kubo and the Two Strings” combines a dash of “The Wizard of Oz” with “Harry Potter.” Just keep your youngest kids home: This entertainment is the stuff of nightmares. Does it deliver what it promises? Japanese stop action animation. Is it entertaining? Fascinating and frightening. Is it worth the price of admission? Might be the animated movie of the year.
Posted by Arch Campbell at 8:46:00 PM