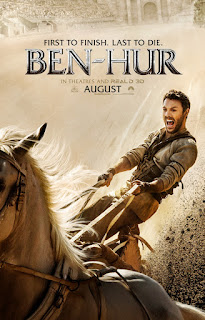 "Ben Hur" returns in a new 3D version that will most likely irk fans of the 1959 Oscar-winning classic. But that's OK, because most people who go to movies weren't even born in 1959. This remake serves up the classic chariot race in 3D and does a grand job. Wheels crash, horses fall, drivers get crushed and the crowd cheers. Jack Huston, whom I've admired since his work in "Boardwalk Empire" plays Judah Ben-Hur, crown prince of a wealthy Roman family. Toby Kebbell plays Messala, Ben-Hur's adopted brother, an orphaned Jew. Messala joins the Roman army and rises to leadership, just one rung shy of Pontius Pilate. (Is this beginning to sound familiar?) Ben Hur stays home, marries a servant girl, and supports neither the Roman army or the Christian zealots who follow Jesus Christ. He shows kindness to a zealot, who repays Ben-Hur's kindness by trying to assassinate Pontius Pilate. The Romans blame Ben-Hur, and sentence him to the belly of a galley ship while sending the rest of his family to prison. The family's adopted brother Messala agrees with the sentence, and the brothers become enemies. Ben-Hur plans his revenge in the galley ship where the rowing scenes during a battle at sea are as exciting as the chariot race to come. Ben-Hur escapes, and works his way back with the help of Morgan Freeman, who sets up the chariot race between the warring brothers. Freeman mouths some of the worst dialogue of the movie, wearing a wig that looks like an old-fashioned mop. "Ben Hur" does fine in the action scenes, but falls flat when dialog is involved. It's uneven... sometimes thrilling, other times laughable. Mark Burnett and Roma Downey produced this remake: They specialize in Christian themed films. I imagine the most religious will find the new "Ben-Hur" watchable. The rest of the world will want to take a pass. 2 stars and PG-13 for violence and a crucifixion. Does it deliver what it promises? Remake of a classic. Is it entertaining? Great action, lousy acting. Is it worth the price of admission? In general, thanks but no thanks.
Posted by Arch Campbell at 7:42:00 PM