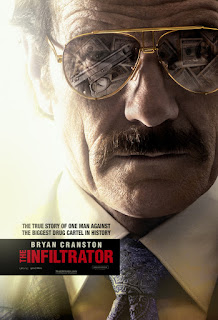 Bryan Cranston plays Robert Mazur, a U.S. Customs agent who published a memoir about the year he posed as a big time, mob-connected money laundry guy in order to infiltrate the Colombian drug trade. Ever since "Breaking Bad," Cranston brings style and gravitas to this kind of role. Cranston's aided by a find cast, including John Leguizamo and Diane Kruger as fellow undercover agents, and Benjamin Bratt as a charming, sophisticated cartel operative in Pablo Escobar's network. I imagine Mazur's memoir makes for white knuckle reading. This film however, feels like too many other drug world stories. A few too many scenes in "The Infiltrator" ring false. Cranston's ability to move between his menacing pose and his life as a suburban dad in the same city feels impossible. Never did I feel his life was really in danger. After all, he's Bryan Cranston: After all, the filmmakers aren't going to kill him off. Fans of Cranston (and there are many) will probably find this OK; but it feels like the same old, same old to me. 2 stars. Rated "R" for sex and violence. Does it deliver what it promises? Drug war memoir. Is it entertaining? Reminds me of "American Hustle," a much better movie. Is it worth the price of admission? For Cranston fans.
Posted by Arch Campbell at 9:49:00 AM