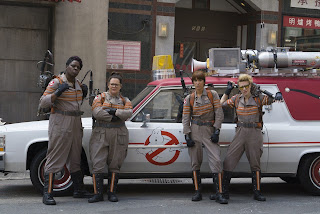 The new "Ghostbusters" feels like two movies: A sparkling comedy, followed by a tedious special effects monster mash. The first hour serves up a lot of fun, as we follow Kristen Wiig, a professor seeking tenure and trying to hide her past as a ghost hunter. A visit to her ex ghost-hunting partner Melissa McCarthy results in a viral video which ends Kristen's academic career. McCarthy has teamed up with wacky techno nerd Kate McKinnon, who has some wonderful scenes describing the various weapons she designs. Together, the three uncover evidence of a new ghost infestation and find a fourth compatriot, when MTA worker Leslie Jones spots a whopper on an abandoned subway track. Now this fab four set out to rid the Big Apple of the bad apples and set up shop with Chris Hemsworth as their dumb beefcake receptionist, twisting the usual dumb blonde at the front desk character with a feminist tweek. The guys from the original return in a cameo, here and there. The largest return spot goes to Bill Murray as a "Noted Ghost Debunker." The four women are very likable, with McKinnon and Jones as breakout performers: I am looking forward to whatever they do next. I remember well the summer of the original "Ghostbusters." The theme song blasted from every radio station, and every kid in town turned out to celebrate the story that summer. As with the original, the new "Ghostbusters" turns into a different movie in the final reel, long on computer special effects and short on comedy and human wisecracks. Once the ghosts take over in the new movie, the energy sags. Give me more funny ladies and less special effects. "Ghostbusters" rates 2 ½  stars and a PG-13 for a few scares and a lot of crude jokes. Does it deliver what it promises? Comedy remake. Is it entertaining? Too long and too many special effects. Is it worth the price of admission? If you remember the original, take a pass.
Posted by Arch Campbell at 4:48:00 PM