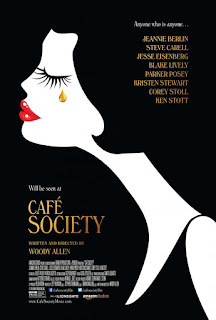 Woody Allen successfully mixes nostalgia with love lost in "Cafe Society." Jesse Eisenberg stars as Bobby Dorfman, a kid who leaves his father's Brooklyn jewelry business to start a new life in 1930's Los Angeles with a little help from his Uncle Phil. Steve Carell plays the uncle, a powerful L.A. agent who gives his nephew the bum's rush at first, but finally comes around and hires the kid as his assistant. As part of his plan to show the kid around town, Uncle Phil summons his secretary Vonnie (played by Kristen Stewart.) As soon as she shows up on screen, we in the audience fall for her, as so does Bobby. But then she lets him and us know she's already got a boyfriend, a married man who plans to leave his wife. As this is a Woody Allen movie, the married man turns out to be Uncle Phil. As Uncle Phil, Carell does a fine job, making the guy bigger and louder than life. Just when you think fate will pull the two kids together, it pulls them apart, as Bobby moves back to New York to join his gangster brother in the night club business. Soon Bobby's the toast of New York and "Cafe Society." Woody Allen narrates the story and Eisenberg makes a fine stand-in for Woody on screen. Bobby's home life gets the usual Woody Allen treatment with Jeanne Berlin tossing off hilarious observations as Bobby's overbearing mother. I like Woody Allen and his movies, even when they feel like stories Woody has already made. "Cafe Society" offers echoes of "Bullets over Broadway," "Radio Days," " Manhattan" and "Annie Hall," among many others. I'm not complaining: Those are great movies. "Cafe Society" has an ace up its sleeve... An ending with a deeply true and totally unexpected twist, I doubt you will see coming. That ending makes this a pretty good Woody Allen comedy, almost great. Three stars. PG 13 for violence. Does it deliver what it promises? A by-the-books Woody Allen comedy. Is it entertaining? Funny, charming and touching. Is it worth the price of admission? If you like Woody Allen, you'll like or even love "Cafe Society."
Posted by Arch Campbell at 5:31:00 PM