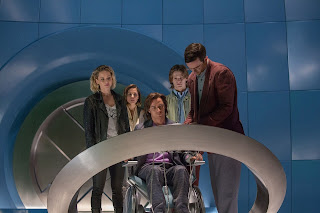 "X-Men: Apocalypse" has a bad case of superhero bloat. This episode, in which the X-Men save the world once again, takes place in the 1980's; but begins in ancient Egypt, where a ceremony appears to invent a super villain named Apocalypse. He's a lot like the Mummy, that angry guy who comes out of his tomb every summer or two. Anyway, world war and destruction begins, and an army of good X-Men kids gather to fight off an army of bad super villains, including beautiful Olivia Munn, who parades around in a swimsuit & cape and gets about two sentences during the entire movie. "X-Men Apocalypse" stuffs its story with so many characters, it takes a genius to keep them straight. This is fan stuff, over stuffed, and a complete mystery to the rest of us. Two stars. Does it deliver what it promises? X-Men superhero saga. Is it entertaining? Overstuffed, long, loud, and confusing. Is it worth the price of admission? Not for the same old thing.
Posted by Arch Campbell at 11:03:00 PM