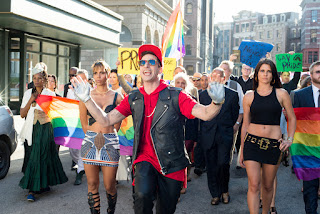 "Popstar" follows in the footsteps of the great satire "This Is Spinal Tap," and manages to come close. "Popstar" updates the barbs to the contemporary music scene, stringing together a series of jaw-dropping outrageous moments, including star Andy Samberg appearing naked in a most surprising display. With more than a touch of a "Behind the Music" documentary, Samberg, Akiva Schaffer and Jorma Taccone begin the story as a trio, until Andy gets big and leaves the others behind. Once Andy reaches the top, the fun begins, as he and his career crash with a thud. This demise gets helped along by a music video of a song in which Samberg declares his support for the LGBT community, while loudly declaring his masculinity. "Popstar" piles one gag on top of another, and stacks the deck with numerous celebrity cameos including musicians and former Saturday Night Live players. Samberg appears to be up for almost anything, as the story paints him as a complete dope. It's not easy to keep this kind of comedy rolling, and "Popstar" comes close. Does it deliver what it promises? Contemporary music world lampoon. Is it entertaining? Very funny, especially at the beginning and even as it runs out of steam towards the end. Is it worth the price of admission? Good for a few hearty laughs.
Posted by Arch Campbell at 5:37:00 PM