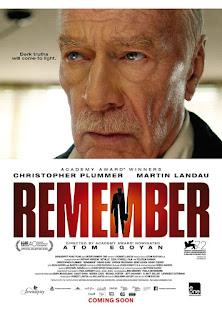 Christopher Plummer plays an elderly man on a mission. With the aid of his nursing home friend Martin Landau, he sets off on a journey to find the man who murdered his family 70 years earlier at Auschwitz. Plummer’s quest is complicated by age, dementia and confusion, and by his grief in the loss a week earlier of his wife. Landau has figured that out, however, providing Plummer with cash and a letter of instructions. The search begins slowly, with four possibilities; but things heat up when Plummer meets Dean Norris, the son of a former Nazi, and is shown the man’s Nazi memorabilia. When the gun Plummer has bought comes into use, the movie amps up to a zinger of an ending. “Remember” has more than a touch of the excellent movie “Memento” and has the advantage of one of the great actors of our time in the lead. “Remember” is sneaky good - a thrilling thriller. Does it deliver what it promises? Mystery thriller. Is it entertaining? Gets better by the minute. Is it worth the price of admission? I recommend it.
Posted by Arch Campbell at 2:01:00 AM