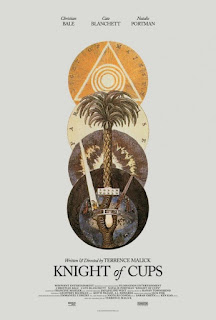 Terrence Malick melds together a montage of beautiful people in beautiful spaces in a non-linear story of a successful screenwriter, musing on what it all means. Christian Bale mopes around modern buildings, spare apartments, and several beaches and swimming pools aided by a succession of beautiful women including Imogene Poots, Cate Blanchett, and Natalie Portman. Several chapters are named for characters in Tarot cards. At times, I fell under the spell of Malick’s beautiful images and music. Most of the time, however, I fought an urge to smirk at what feels like a pretentious essay on the emptiness of having it all. Does it deliver what it promises? Artistic musing. Is it entertaining? Hard to follow. Is it worth the price of admission? Only for Terrence Malick fans.
Posted by Arch Campbell at 3:38:00 AM