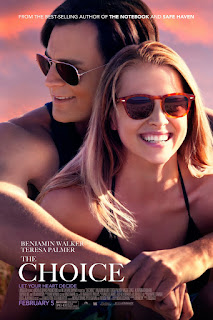 Nicholas Sparks has a winning formula for his books and films. “The Notebook” remains the high point so far. The stories take place in either North or South Carolina, and revolve around feisty Southerners meeting cute, playing in the ocean, falling in love, and surviving or being transformed by tragedy. Characters in a Nicholas Sparks story often spend a lot of screen time in a coma. “The Choice” follows Sparks’ successful formula. Benjamin Walker plays the feisty Southerner. Teresa Palmer is the appropriate blue-eyed blond. She lives next door, in a Martha Stewart approved cottage by the sea. They meet cute, don’t like each other, overcome other boy and girlfriends, and marry. The proposal scene between these two brims with so much emotion, it’s impossible to resist. Cynics will snicker at the usual formula, but fans won’t care. I would love to see a Nicholas Spark movie approach the brilliance of “The Notebook,” which combined generations as an elderly man tells his memory-challenged wife the story of their romance. “The Notebook” identified Rachael McAdams and Channing Tatum as actors on the rise, and gave James Garner and Gena Rowlands a late career plum. “The Choice” merely claims Nickolas Spark’s position as a moneymaking movie to release close to Valentine’s Day. Does it deliver what it promises? A Nicholas Sparks movie. Is it entertaining? Aimed squarely at romantics. Is it worth the price of admission? Not really a must-see, but more of a "if you must."
Posted by Arch Campbell at 8:00:00 PM