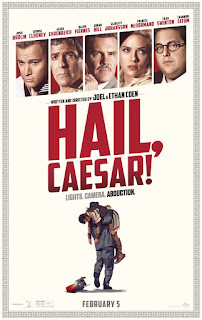 Brilliant filmmakers Joel and Ethan Coen pay tribute to the golden age of cinema, while mercilessly lampooning the classics in “Hail, Caesar!” Movie lovers can check off the “quotes” which parade through at a clip. The story takes place on the studio lot, run for the New York boys by Josh Brolin. We watch the action, as Brolin oversees this entertainment circus. His duties include saving a starlet from scandal, fixing a pregnant superstar’s image, and rescuing kidnapped superstar George Clooney in time for the star to finish the studio’s high prestige picture of the year, a Roman drama somewhere between “Spartacus” and “Ben Hur.” The great sport George Clooney plays the kidnapped superstar, hijacked by a group of Communists who funnel the ransom money to an unlikely source. Maybe because I’ve been around a while, I get most of the references, including Tilda Swinton as a Hedda Hopper-esque gossip columnist, Scarlett Johansson as an Esther Williams-style swimming star, Channing Tatum as a Gene Kelly-esque hoofer, and up-and-comer Alden Ehrenreich as a singing cowboy. Ehrenreich steals the picture with a series of rope tricks that give new meaning to the word “delightful.” “Hail, Caesar!” full of delight. Does it deliver what it promises? A movie lovers movie. Is it entertaining? Delightful. Is it worth the price of admission? Absolutely.
Posted by Arch Campbell at 9:37:00 PM