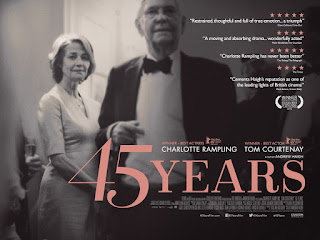 As “45 Years” begins, Charlotte Rampling plans for a 45th anniversary dinner dance, to celebrate her long satisfying marriage to husband Tom Courtenay. The couple’s comfort gets a jolt from unsettling news. Authorities have found the body of husband Courtenay’s former girlfriend, lost fifty years earlier in a hiking accident. The news awakens his feelings for this other woman. His response in turn unsettles what had looked like a happy partnership. “45 Years” drama unfolds quietly under the surface. Charlotte Rampling has received award attention, including an Oscar nomination as Best Actress. She gives a slow, subtle performance, which ends with a chill. This is powerful stuff. Does it deliver what it promises? Longtime relationship unravels. Is it entertaining? A performance to admire. Is it worth the price of admission? Award-worthy acting.
Posted by Arch Campbell at 6:03:00 PM