How to Be Single Review - 1 Star 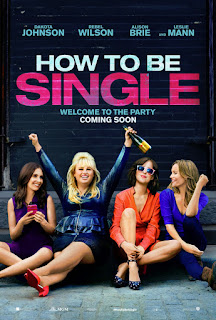 “How to be Single” joins a long list of “R” rated, foul-mouthed sexualized comedies, hoping to capture some of the success that made “Bridesmaids” a hit. “How to be Single” uses Liz Tuccillo’s book as its source, but not much else. The story begins as Dakota Johnson breaks up with her steady boyfriend, in order to find herself and live a modern single life. It doesn’t take long for Dakota to find out she hates the single life; but by this time, her ex has found someone else. At work, the bawdy Rebel Wilson takes Dakota under her wing, and begins training in how to hang out at bars and pick up guys. Leslie Mann arrives as Johnson’s older sister, a never-married baby doctor who has embraced the single life, but suddenly feels the need for a sperm donor. Alison Brie rounds out the foursome as a woman spending too much time on computer dating sites. The language and sexual situations earn “How to be Single” its “R” rating. “How to be Single” wants to let us know it’s OK to live alone. I agree that the world is much more free than a generation back. I will assume the filmmakers had good intentions. In spite of good source material, “How to be Single” offers little, beyond an empty couple of hours. Does it deliver what it promises? Sex comedy. Is it entertaining? Tedious. Is it worth the price of admission? Save your money for your real Valentine.
Posted by Arch Campbell at 8:20:00 PM