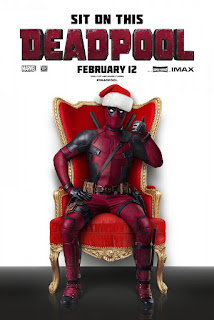 Ryan Reynolds has a wonderful time as “Deadpool,” a foul-mouthed superhero in red spandex who can’t resist breaking character in order to spew profane, hilarious wisecracks at the audience. “Deadpool” runs on attitude and that makes it great, extremely violent fun. Oh there’s a plot. Ryan Reynolds - a bad guy, who makes a living creaming even worse guys - finds the girl of his dreams in Morena Baccarin. The two showcase their love-making variety in a hilarious, exhausting montage. So of course, tragedy intervenes. Reynolds gets the big “C.” Bad guy Ed Skrein lures our hero to his laboratory with the promise of a cure. This being an origin story, Skrein’s cure saves Reynolds’ life, but turns him into a monster with a face like a four-cheese pizza. For the rest of the movie, Reynolds vows to get the guy who messed him up, so he can get his face back and return to the woman he loves. “Deadpool” delights in shocking viewers who expect their superheroes PG-rated. This one aims for the hardest of “R” ratings and hits the bullseye. Don’t expect another “Ironman,” but do expect a guilty pleasure. Does it deliver what it promises? R-rated superhero comedy. Is it entertaining? Even the credits are funny. Is it worth the price of admission? For fans.
Posted by Arch Campbell at 10:18:00 PM