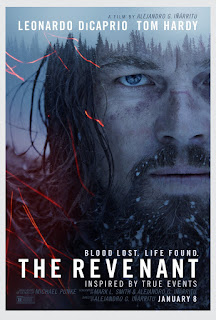 Leonardo DiCaprio makes another bid for an Oscar in “The Revenant.” As the film opens, he leads a group of trappers on a hunting expedition somewhere in the mountains. Suddenly, hostile Indians strike and the screen turns bloody. DiCaprio must lead the survivors back to an Army fort and safety. Then, in a scene that sets the bar for state of the art terror, a mama bear attacks DiCaprio and comes close to eating him alive. Tom Hardy continues his string of amazing characters: His character’s in this expedition for the money. As winter sets in, the survivors must move out, promising a reward to Hardy and Will Poulter if they can bring DiCaprio back to safety and treatment: Future expeditions need DiCaprio, due to his tracking knowledge. Hardy waits for the group to move out, then buries DiCaprio alive. DiCaprio rises from his grave, now tracking Hardy for revenge. “The Revenant” communicates the harshness of nature, winter and the dark side of man’s nature. But frankly, it’s a slog. DiCaprio may win the Oscar. I get it: “The Revenant” was a difficult project. But that doesn’t mean I have to watch or enjoy it. Oh by the way, this takes two-and-a-half hours. Does it deliver what it promises? Old school revenge drama. Is it entertaining? A slog. Is it worth the price of admission? I pass.
Posted by Arch Campbell at 4:58:00 PM