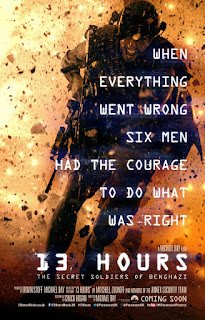 “13 Hours: The Secret Soldiers of Benghazi” focuses on the experience of five of the survivors of the 2012 attack on the U.S. Consulate and a nearby CIA station in Benghazi, Libya. U.S. Ambassador Chris Stevens and three others died during the ordeal. Politicians have turned the event into campaign rhetoric. “13 Hours” avoids the rhetoric, sticking to the story of the men whose actions saved dozens of American lives. Director Michael Bey stays with this good guys versus bad guys theme. The bad guys include rebel attackers, as well as a CIA bureaucrat who delays permission for the contract soldiers to do their job. The action comes with a sense of dread, since we know the outcome and we know those in danger were left hanging by a weak U.S. response. What “13 Hours” lacks is much in the way of why this happened. The film hints that the attacks were planned days in advance. The result is a gripping, fact-based video game. John Krasinski makes a nice contribution as one of the soldiers for hire. Does it deliver what it promises? Recreation of the terror of Benghazi. Is it entertaining? Tense. Is it worth the price of admission? For action fans.
Posted by Arch Campbell at 4:34:00 PM