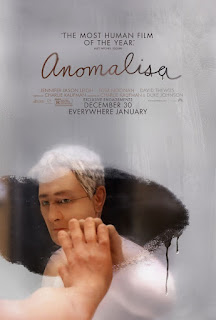 Writer/director Charlie Kaufman has created some of the most delightful, mind-bending movies of the last couple of decades, including “Being John Malkovich,” “Eternal Sunshine of the Spotless Mind” and “Adaptation.” Watch these, if you missed them or want a reminder of Kaufman’s talent. “Anomalisa” - an anagram of “Anomie” and “Lisa” begins as a semi-famous business author lands in Cincinnati to make a speech and sell a few books. Bored, he calls up an old flame and it ends badly. Roaming around the hotel, he meets Jennifer Jason Leigh. She connects with him in a way no one else does. By the way, have I told you this story’s played with fuzzy looking puppets, stop-action style? Weird, right? Everyone’s voice is the same except for the lead - voiced by and modeled on actor David Thewlis - and Jennifer Jason Leigh. Thus, their connection. The pair have a one-night stand, graphically portrayed by puppets. Can this get any weirder? Yes. A nighttime dream sequence throws Thewlis into a Kafka nightmare. I will now quote the reaction of my friend Travis Hopson, who left the preview and pronounced “That’s some weird s**t.” Yeah, too weird for me. Does it deliver what it promises? Puppet show. Is it entertaining? Off-putting. Is it worth the price of admission? Kaufman’s fans will want to see, but the rest of us can take a pass.
Posted by Arch Campbell at 2:26:00 PM