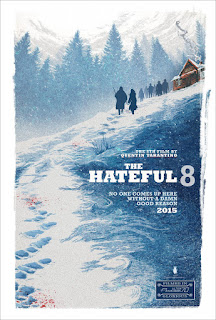 The American Film Institute is one of a handful of theaters showing the 70 mm road show production of Quentin Tarantino’s “The Hateful Eight.” The $20 presentation takes more than three hours... so long, they break halfway through for an intermission. The experience, which includes a full scale overture, is old school in the best sense of the world. The story is Tarantino in the best (and worst) sense. Broken into chapters, it begins in a stagecoach trying to outrun a blizzard. Kurt Russell is in the process of transporting Jennifer Jason Leigh to Red Rock Wyoming for justice and a $10,000 bounty. Samuel L. Jackson talks his way onto the stage, when his horse collapses under the weight of the dead criminals he’s transporting. “The Hateful Eight” cements Jackson’s place as the most outrageous actor of our time. A fellow bounty hunter, he smells a rat when the stage stops at a roadhouse full of travelers stuck in a driving blizzard. The eight staying inside include Bruce Dern as a racist former Confederate General, and Tim Roth, Michael Madsen, Walton Goggins & Demian Bichir as characters who turn into more than meets the eye. Channing Tatum also makes an appearance, but the movie belongs to Jackson, Russell, and Jennifer Jason Leigh. She turns this old west tale into something just this side of a horror movie. I hate to think of some poor soul, stumbling into this with no idea of what he or she is in for. I’ll just say the language fails the “politically correct” test and the violence gives new meaning to “over the top.” “The Hateful Eight” certainly qualifies as a guilty pleasure, even though it takes too long. Does it deliver what it promises? Violent, crude western horror Tarantino delight. Is it entertaining? Long, but outrageous fun. Is it worth the price of admission? Some of you will love this, and you know who you are.
Posted by Arch Campbell at 5:41:00 PM